All of Year 4 were lucky enough to attend the theatre production of 78-Storey Treehouse at The Concourse. Everyone was very well behaved on the public transport and seemed to have a great time watching the performance.

'The legendary Mr Big Shot has arrived to make a Hollywood blockbuster! But when his first step is to fire Andy and replace him with a monkey – well, a gibbon named Mel Gibbon – the battle is on. Will the Treehouse Blockbuster ever get made? Who will win the battle of Andy and Terry? And why are those mysterious spy cows turning up everywhere?' 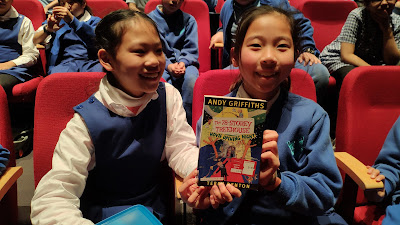 Studying before the performance?
Posted by Mr Rees at Monday, July 30, 2018